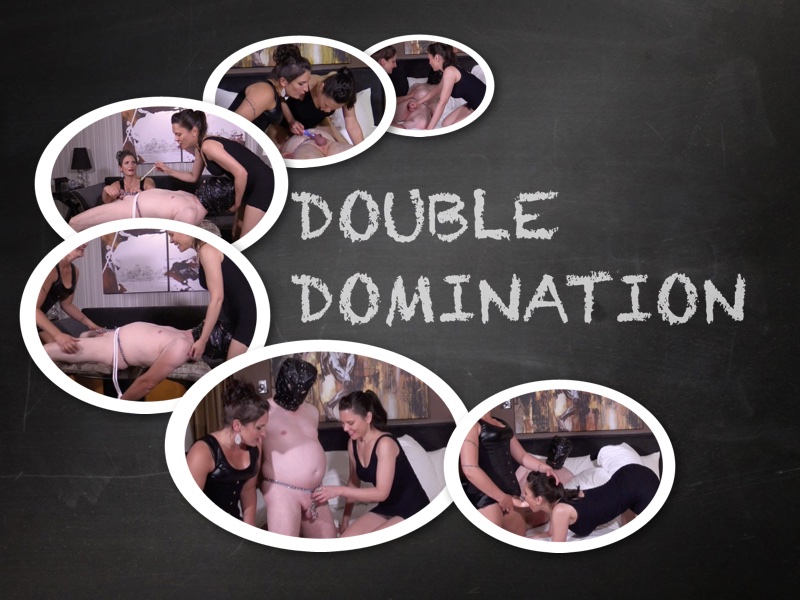 Before entering this lifestyle, I had always fantasized about double domination.

Being submissive to two or more women seemed like heaven to me. I was never very popular, so the thought of surrendering to two women in intimate ways, appealed to me.

Nadia & Miss Pandora were my first experience in double domination, which I discussed in: Chastity Keyholder Problems, Chastity Birthday Surprise and Taboo Chastity.

My next experience with two dommes came on my trip to Philadelphia the following month.

I was scheduled for a session with Audrey and she decided she would bring along her friend, Mistress Carolina. The two of them were looking to laugh, and decided I was to be the source of amusement.

It all started with me tied to a coffee table. A knock on the door surprised me and Audrey let Mistress Carolina in.

The pair began tickling, teasing and frustrating me in a non-ending series of sensations. At times I had their panty covered crotches in my face, allowing me to smell their excitement over my fate.

We edited 19 minutes from this for the clip: Double Domme Tickle Torture.

Audrey ordered me to move the lights and cameras to the bedroom for our next scene.

To say this was difficult is an understatement. Audrey was sitting on my face and the two of them took turns stimulating my dick. I was going insane by the time they finished. And of course, they shoved me back into chastity without release.

The cage went on off camera giving me time to deflate. Ice never helped diminish my erection, only time and neglect.

Mistress Carolina took a break and Audrey began to dish out some small penis humiliation. She kept telling me she planned to compare it to a real cock.

I thought I heard the door, and was agonizing that a man was coming into the suite. Instead, Mistress Carolina showed up with a strap-on. I learned later that a “real cock” is determined by its size.

This SPH humiliation clip released with the title: Comparing You To A Real Cock.

Although these double domination clips are a few years old, they are still hot sessions that I enjoy reliving as I watch.

← Back To Gianna Love If You Had A Bigger Cock →